Does Your Home Have a Musty Odor? Time to Check The HVAC System 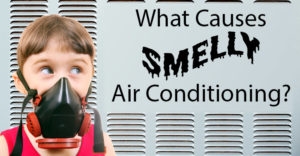 Musty odors may be caused due to multiple reasons. But whatever the cause, a bad smell lingering in your house is going to make everyone uncomfortable.

It is not just annoying to put up with it but it can also be a bother physically, giving some people headaches and undermining anyone’s quality of life. Also, everyone adapts differently to smells and an odor which does not bother one member of the family could be unbearable for another.

Musty odors are a problem, especially when your house has no natural ventilation and you are relying completely on your HVAC system to circulate breathable air inside the house. Musty odors are embarrassing too, when you have guests and relatives over.

They are bad for kids, pets, old people and anyone who may be sensitive to smells and they also get into your clothes, linen, furniture, and other household items. Getting rid of the odor from these is very difficult.

If you are facing an odor issue in the house, it is time to check your HVAC system for the cause as well as the solution.

Most families try out the common ways of getting rid of odors in the house like room sprays, air fresheners, or cleaning of the house.

Home air purifiers are also an option. But some people may be allergic to sprays and air fresheners so these would have to be ruled out. If even after these efforts, the musty smell still persists, it could be your HVAC system that is contributing to the odor.

How do HVAC issues cause bad odors?

How to get rid of musty smells?

If you are experiencing bad odors in the house, schedule an HVAC inspection. The technicians will look for dirty ducts, clogged drains, clogged air filters, and also design issues. If your HVAC system has not been cleaned and serviced in a long time, getting it done could probably be the only thing required to get rid of the musty smell.

A detailed inspection and cleaning could be slightly expensive, but it is worth undertaking it every few months to ensure that your system is running in top condition and there is no chance for moisture, mold or dirt to cause bad smells.

Your system ductwork needs to be designed in such a way that proper balance is maintained in the amount of air being mechanically removed and added into the house. Rerouting ductwork or shifting the position of a fan or vent can help avoid the spreading of bad odors.

11 Ways to Check Your HVAC is Ready For Summer