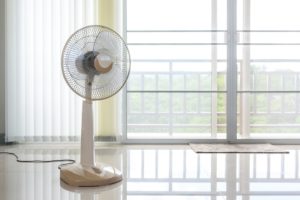 Humans have been using fans as cooling devices for thousands of years, as early as 3000 B.C. The fans of ancient Egypt were made of palm fronds or lotus leaves. Servants who were designated fan bearers used these fans to keep kings and other high ranking officials comfortable. Around 500 B.C. in India, the punkah fan was a handheld fan fashioned from bamboo strips. Over two thousand years ago, the Chinese crafted handheld fans from silk or bird feathers.

These early fans would not have been enough to cool an entire room without employing a considerable amount of manpower. It was not until 180 B.C., when a Chinese inventor named Ding Huan created a rotary fan, that cooling by fan could be done efficiently. Ding Huan’s innovation was made up of seven wheels, each measuring ten feet in diameter. This fan required only one person to operate by turning a crank. Later versions of this fan were powered hydraulically.

HVAC And Humidifier: A Short Guide

Sandium Heating and Air Conditioning - HVAC Company San Jose © 2022 | Sitemap
Top
Under the order of the Bay Area counties for shelter in place, our business is continuing to provide essential services to homeowners to ensure your homes are comfortable and efficient.  The health of our clients and team members are of utmost importance and we have established Covid19 protocols for our team members to follow when they visit your home.  Details can be found by following the link below.  This is a trying time and we wish for everyone’s safety getting through this challenge.
Sandium Management
3/17/2020
Sandium Covid 19 Team Guideline